The human brain has 80 billion+ neurons, and each neuron has 200-300 synapses. Neurons are connected through synapses, forming a neuron network that can think intelligently.

Unfortunately, short-term memory is limited on capacity. Some studies believe that its capacity is 7±2units, but others find that it is only 4 , which is called working memory. The reason why working memory so short-lived is that it relies on the transient firing of a large number of neuron cells to store information. 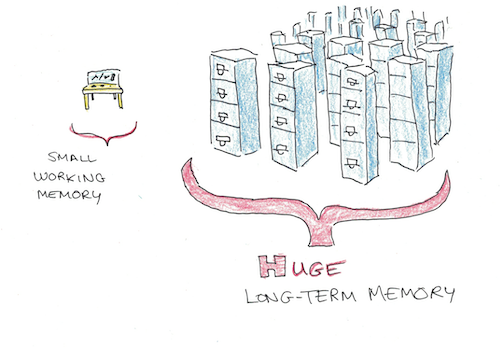 Back in 1945, Vannevar Bush, director of the U.S. Office of Scientific Research and Development, published a famous article, named As We May Think , which would have far-reaching consequences for later generations. In the article, he envisions a device for recording, storing, organizing and browsing personal knowledge bases: Memex.

Bush described Memex as a desk, in which people can easily store documents, photos, notes and other materials in microfilm through a set of electronic and mechanical devices,, and also can easily index and view these information. More specifically, people can also use a linear sequence to reorganize them to form an Associative Trail. It simulates the working mode of the human brain: store and index a large amount of information, and then pass through some clues to organize them.

Bush believed that Memex should be a private document and library system, that gives people access to huge pieces of knowledge, allows people to create personalized threads of information and notes in it, and can be shared with others.

He had this statement in the text:

Our ineptitude at getting at the record is largely caused by the artificiality of systems of indexing. When data of any sort are placed in storage, they are filed alphabetically or numerically, and information is found (when it is) by tracing it down from subclass to subclass. It can only be found in one place, unless duplicates are used; one has to have rules as to which path will locate it,... The human mind does not work that way [i.e. linearly]. It operates by association. With one item in its grasp, it snaps instantly to the next that is suggested by the association of thoughts, in accordance with some intricate web of trails carried by the cells of the brain.

In the 1960s, 15 years after Memex was made public, Douglas Engelbart, who was deeply influenced by Bush, proposed a human-machine collaboration system: NLS (oN-Line System). In this system, Engelbart proposed many technologies including Mouse, Hypertext Link, Multi-window Interface, etc., which constituted the prototype of human-machine interface of personal computer.

NLS was envisioned by Engelbart in his 1962 paper "Augmenting Human Intelligence: A Conceptual Framework" and later demonstrated at a computer-related conference in San Francisco in 1968. That had named by later as The Mother of All Demos.

NLS is actually just a specific implementation of Engelbart's Augment System Theory. He expected computers to improve the level of human intelligence. He introduced this idea entirely in Augmented Knowledge Workshop in 1986. Some of the wonderful excerpts are as follows:

There are many inventions, skills, methods, working conventions, organizational modes, etc. which have been integrated into the human's knowledge-work environment to "augment" his basic, inherited, biological capabilities. Let a working assemblage of all of these be called an Augmentation System.

I broke the many parts of the Augmentation System into two main sub-systems: one contained all of the hardware, software and other artifacts -- the Tool System; and all the rest of it I called the Human System. Note that the Human System contains our natural languages, and the conceptualizations and formalisms of every discipline: an overwhelming network of invention.

The emergent information technologies promised such startling innovation in the Tool System, most of the Human System elements that are involved in our knowledge work are likely to be up for improvement or replacement. And the Framework further predicted very large improvements in human knowledge-work capability as a result.

This kept me focused on documents -- which carry the knowledge, plans, arguments, etc. that are critical to helping us better climb the evolutionary hill. It also very directly pointed to the importance of developing improved support for collaboration among distributed workers.

I still don't see clear perceptions about what we humans can gain in new capabilities, or about how this may come about. There are constant, echoing statements about how fast and smart the computers are going to be, but not about how the enhanced computer capabilities will be harnessed into the daily thinking and working life of our creative knowledge workers.

Obviously, Engelbart is not just creating a human-computer interface, but a knowledge management system that enhances human intelligence. However, such a document system has not yet been fully implemented.

Lattics provides a library of cards where messy, fragmented information can be stored. Cards can be dragged from the card library into the project outline to become articles; and they can also be cited in articles and become part of the body content.

The text content in the article, such as paragraphs, pictures, tables, code blocks, mathematics formulas, etc., can be dragged and moved in the way of "Block" to adjust the position in the article.

Lattics provides three hierarchies: Project - Article - Card by default, which can achieve almost all content creation scenarios with a very high degree of flexibility. You can use projects to distinguish reports, papers, reading notes, novels and other different writing projects; use articles to write and organize body text; use cards to record famous sayings, character descriptions, various inspiration and fragmentary information, etc... Using them effectively will greatly enhance knowledge creation.

Lattics provides @ syntax to cite cards in articles, which makes it easy to connect or reuse contents. By default, citations are displayed as title of cards, which can be regarded as local "hyperlinks"; citations can also be displayed as full-text of cards. That is more convenient than "copy-paste" method.